Background: I currently work as a software developer, but my background is actually in chemistry, with some specific experience in pharmaceuticals including drug development, generation of drug variations and extraction of natural drugs from plants.

Here in Berlin, there has been a recent trend to buy “Legal LSD”, available from shops in the city. They are marketed as a legal version of the drug LSD which has been proven to have a deeply positive effect in many of those who consume it.

Many seem to be taking the marketing of these drugs to mean that they are buying actual LSD from these shops, whereas they are in fact consuming an untested research chemical. The two I have heard of being sold here are 1cp-LSD and 1v-LSD.

Websites selling these products include statements such as “LSD can cure addiction, anxiety, and depression” which is correct, but the drugs they are selling are not LSD and there seems to be no evidence (yet) that they help with these things. In fact there seems to be no studies published which indicate that they’re even “safe”.

It has apparently been legal to sell these drugs in Germany and other places for research purposes, which is great, but marketing them as “legal LSD” seems quite evil to me. They’re simply not LSD. They’re something else and customers need to understand this.

“But they’re just a variation of LSD, they’re basically the same” is a common statement made when I point out that these drugs are not actually LSD.

I haven’t done any direct testing on human subjects, but I have made similarly tiny changes to drugs (not psychedelics) which were tested on rats. Sometimes the rats would starve themselves rather than touch the modified drug and sometimes they would simply die. The human body is just as complicated as a rat, and we have no way to predict how these drugs will behave in us. Obviously you won’t immediately drop dead when consuming these, or the first person to try it wouldn’t have been there to recommend others try it. And perhaps they are as safe as real LSD, but people need to be aware of the unknowns with these drugs. Just because some dipshit who is legally selling you a product in a shop says something is safe, does not mean it is safe.

The drug 1cp-LSD was made illegal recently, so it seems that the shops will be switching to the newer 1v-LSD. A cursory glance at the molecular structure of it, shows a substantial difference to actual LSD. 1v LSD has a large valeroyl group attached to the amine instead of a simple proton. How will this effect any humans who ingest it … we don’t know. It may simply fall off in your gut, leaving behind regular old LSD, but we don’t know this for certain. There are studies indicating that some of these drugs are likely to be “prodrugs” for LSD (eg: 1P LSD), but “likely” is not proof and trusting a guesstimate by an early research paper does not seem like a good idea to me. 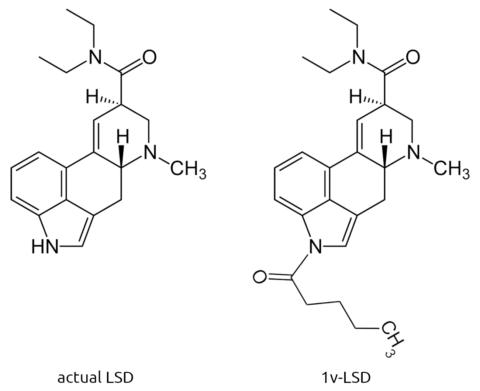 The difference between actual LSD and 1v-LSD.

These drugs are not LSD. Perhaps they are prodrugs for LSD, with similar safety profiles, but we don’t know that and claiming to know they are safe and healthy is foolish at best. These are relatively untested unknown drugs with unknown safety profiles. Hopefully some day we will be able to go to the pharmacy and pickup a box of LSD tablets, but we are not at that point yet unfortunately. Hopefully the morons in charge of drug regulation will pull their heads out of their arses and legalise psychedelics with proven safety profiles and clear benefits to the consumers, but until then, please be careful when consuming untested research chemicals. You don’t need to be a human guinea pig. 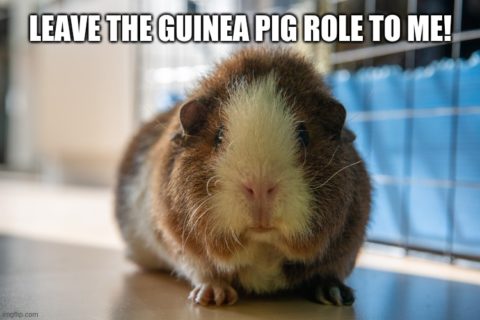 Thanks to Max Pixel for sharing this Guinea Pig image under the Creative Commons Zero – CC0 license.

EDIT: 2021-08-16: Thanks to the folk in the Psychedelic Society Berlin Facebook group who pointed out some things which I did not explain in a clear way and errors. In particular, I removed an entire section involving a comparison between psilocin and serotonin, as the point I was trying to make was being missed, as it wasn’t a very good comparison with the situation with the LSD derivatives, as neither are a pro-drug for the other.