Backing up your website regularly is extremely important. If you aren’t already doing it, then you should be! I’ve seen way too many people have their websites hacked or had the server break and lose all of their content. In the case of a hacked website, trusting the free backups from your web host is a recipe for disaster as they usually don’t store them for longer than a week, but most people don’t realise they’ve been hacked for weeks or even months after the hack occurs. So you need to make sure your data is stored long term to allow you to recover easily.

All of my attempts to use backup plugins on my own website have unfortunately failed, this included BackupBuddy and Backup WordPress”. Services such as VaultPress probably work very well, but require giving access to your server to an external service (which I don’t like the idea of) and cost an awful lot of money. The reason the plugins failed was due to the shear size of my website. I have over 6 GB of images stored in a multisite running 13 different websites. Compressing all that up and sending it off to an external location just wasn’t possible for a run of the mill WordPress plugin.

Due to the lack of suitable plugins, I ended up paying for a long-term backup service from my web host Linode (US$5/month) and I setup a Cron job to automatically zip my files once per week and my database once per day and send them to Amazon S3 for storage. This worked extremely well, but did require knowing a little about bash scripting and how to use a Linux terminal, so isn’t suitable for most people.

I mentioned this issue to Alex Frison from MarketPress at WordCamp Europe last year. He said he would send me a copy of their BackWUPUp Pro plugin for me to try out. Fast-forward four months, and Alex sent me a copy of their latest version for me to test out. I didn’t expect much of this, but decided to humour him by trying it out. Much to my surprise, it did manage to compile my site into a .tar file, but failed when it attempt to zip that .tar file up. The plugin comes with a plethora of settings, including the ability to turn of the gzip compression. On turning off the compression, the plugin promptly compiled my site into a .tar file, including all images, all PHP files and the database and sent it off for storage in my Amazon S3 bucket. Success!

The plugin costs US$75, but is well worth the price if you are looking at a reliable way to handle backups. It’s extremely feature rich (check out the plugin page for a full rundown on it’s features) and can handle even reasonably large sites, unlike most other plugins I’ve tried in the past. They also have a free version available on WordPress.org, although I haven’t tried that one out. 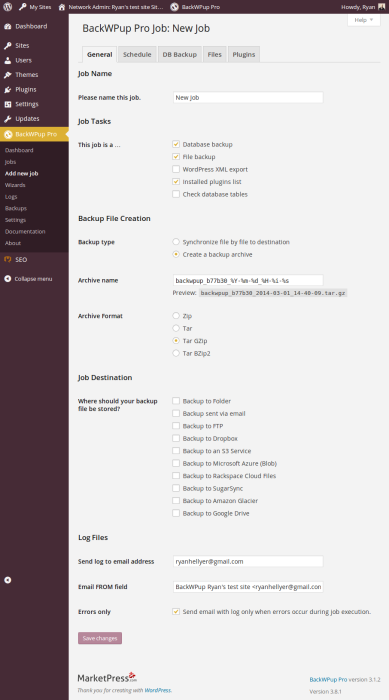 Note: I haven’t tried out any other backup plugins for a while now, so it is possible that others have upgraded.