Those of you who have been in the community for a long time will remember the TalkPress project. It was intended as a hosted platform for running bbPress forums, essentially a bbPress version of WordPress.com. It was first mentioned by Matt Mullenweg back in January 2008. Nothing much was heard of it until it was mentioned again in April 2009.

There was an initial joke website setup for the project at TalkPress.com which was powered by phpBB and included humorous posts from prominent members of the WordPress and bbPress community joking about how it was a huge upgrade for them. Later on the site was updated properly to explain it’s real purpose of providing a killer hosted service for a fee to those looking for a scalable forum solution. It was later announced in May 2009 that Health.com would be changing to use the TalkPress platform to power it’s forums. Little was heard about it from then on and it seems that Health.com no longer uses TalkPress.

Fast forward a few years, and many in the community assumed the project would never be heard from again. The original bbPress software used to power TalkPress was abandoned and replaced with a plugin. However, a tweet today from bbPress project lead John James Jacoby followed by a question from WP Tavern owner Jeff Chandler, indicates that TalkPress is not only alive and well, but is being tested live on WordPress.com right now. With the move from standalone forum software to being a plugin, the bbPress project is ideally situated to launch the TalkPress concept directly onto the existing WordPress.com infrastructure. 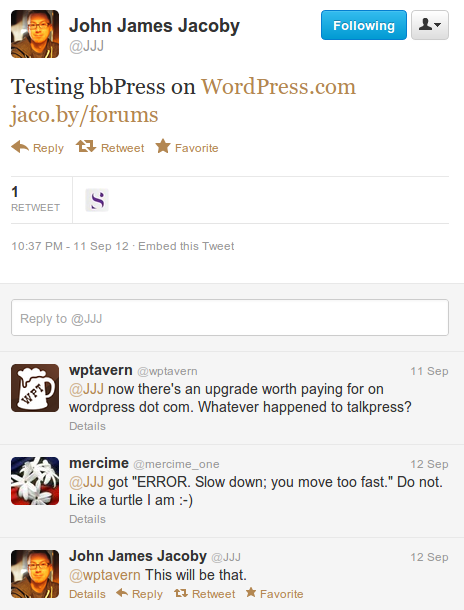 So what do you think? Will WordPress.com be gaining the ability to handle hosted forums some time soon?

2 Responses to “TalkPress: Is bbPress Finally Coming to WordPress.com?”