We are happy to announce the release of a new beta product, the PixoPoint Menu Animations plugin.

The primary feature of the PixoPoint Menu Animations plugin is the addition of a smooth animated effect to your dropdown menu, but as always, the truly helpful stuff is in the details and this plugin has plenty of details (ie: options) to let you set your menu up the way you want it. 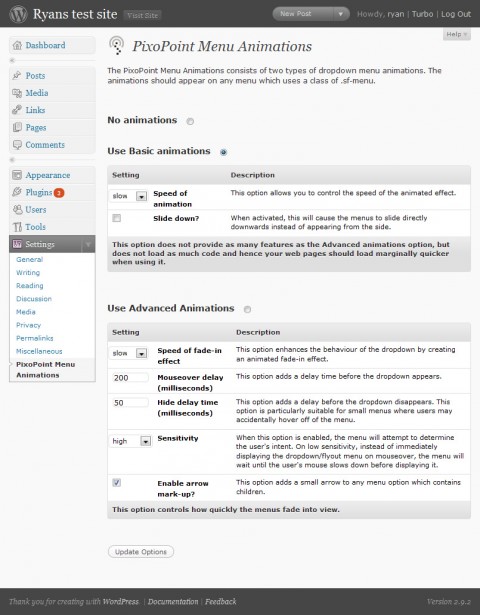 The settings page for the PixoPoint Menu Animations plugin

After you’ve downloaded and extracted the files:

If your theme does not use a class of .sf-menu, you will need to add that class yourself. The Hybrid, Thematic and Genesis theme frameworks are supported automatically as is the PixoPoint Menu plugin.

Any themes which use a class of .sf-menu on their menus unordered list will work with this plugin, however many themes already include the Superfish jQuery script which is used by our plugin. To avoid clashes with these other themes, we have intentionally deactivated the dropdown menu scripts in these themes. If you know of any themes which we could also add support for, please let us know!

The themes which are currently supported are:

PixoPoint Menu plugin (where it gets confusing)

The current beta version of the PixoPoint Menu plugin includes the PixoPoint Menu animations plugin inside it for compatibility with previous versions, however in the future this will be removed and users wanting animation effects will need to install this plugin directly.

How come it’s not in the repo?

We are holding off adding this plugin to the official WordPress plugins repository until it and the new PixoPoint Menu plugin beta are ready for stable release. Rest assured, that once they are ready, they will be added into the official repository.

All free support questions will be dealt with via our support forum. For paid support, please sign up for our Premium Support service.